The renewed HB BODY Refinish in this year's Autopromotec! 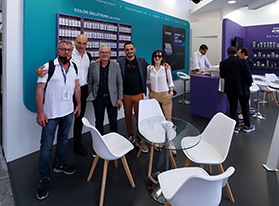 Quality, innovation, and internationalization were the key elements of the Autopromotec report which returned 2 years of absence due to the coronavirus pandemic. HB BODY Refinish participated in this year's exhibition, which took place in Bologna, Italy, from 25 to 28 May and is considered one of the largest exhibitions in the auto parts industry in Europe.

This year, HB BODY Refinish celebrates 40 years since its founding. A few months ago, he announced the establishment of the HB BODY Group, consisting -now- of 4 leading companies in different industries, while at the same time he launched the new visual identity of the company, which came to give another breath to the overall picture.

The 29th edition of the Italian exhibition Autopromotec welcomed more than 70,000 visitors in four days, while it hosted hundreds of exhibitors who were there taking the opportunity to meet their customers again in real time.

There, HB BODY Refinish presented some of its new products that have been released recently, "dressed" in new packaging. At the same time, it continues to actively pursue its firm strategy for the rapid expansion of its global network from its headquarters in Greece, taking advantage of the group's existing synergies, and its branches in the United Kingdom, Spain, and Bulgaria.

But this is only the beginning. HB BODY Refinish does not stop evolving by constantly creating new products that serve the needs of every interested party, while it continues to look forward to seeking and creating new opportunities on an international scale. At the same time, it is preparing for the Automechanika Frankfurt exhibition, which will be held from 13 to 17 September in Germany, where the company will be there to celebrate the 40th anniversary of its first start officially.