Drift Kings 2021: Zakouřil and Hatzaras are among the best drivers with the support of HB BODY! 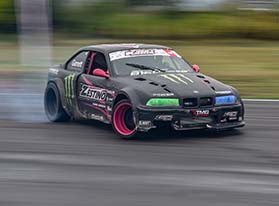 Two weekends -  two big events in motorsports! From 2nd to 10th of October, the area of ​​Serres hosted two of the biggest drift championships in the world. The Drift Kings Touge Finals and Drift Kings International Series for 2021.
Drift Kings Touge Finals started on Saturday 2 October, in Nigrita, where top European Drift names were present, with Czech Marco Zakouřil and Greek Christos Hatzaras, drivers which HB BODY supports for the 3rd consecutive year, standing out. The race started with Marco Zakouřil at the top of the grid, as in the 2nd race he achieved the highest score with 92 points, followed by Christos Hatzaras with 89 points, while the trio was completed by the Frenchman Stieve Lieber with 86.33 points. A ranking that was reversed on the 2nd day with Lieber winning the final standings, leaving Zakouřil and Hatzaras in the next 2 podium places.
The following weekend, the drivers were at the Serres Motorway for the final of the Drift Kings International Series. The rain, the cold, and difficult conditions may have dominated on the two days, but that did not stop the drivers as they started racing on a wet track. Sergio Grigoriou appeared to be in the best position to win the race, leaving Marco Zakouřil in 3rd place in the two days and 2nd in this year's championship!
Four days full of large doses of impressive spectacle, scattered smiles, admiration in the eyes of the spectators, and a lively rhythm in the atmosphere. HB BODY is looking forward to be part of this championship next season, supporting motorsport and the people who give it real meaning!