The "Rally of the Gods" returned to the Acropolis and HB BODY was there!! 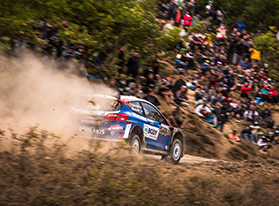 The Acropolis Rally Greece has returned to the World Rally Championship (WRC) calendar after 8 years and the iconic stages were not missing.

HB BODY, as a fan of motorsport and speed, supported the big global sporting event of the Rally Acropolis 2021 and specifically the Ford Doulakis team.

The driver Panagiotis Hatzitsopanis, 3 times Greek Champion (2004, 2005, 2008) and one of the greatest talents that lead Greek rallies, made his return to racing action with Nikos Petropoulos as his co-driver in an advanced four-wheel-drive Ford Fiest Rally 2 MkII.

The return of the national race to the World Rally Championship (WRC) program after 8 years, causes great excitement and impatience, while the audience was thrilled!